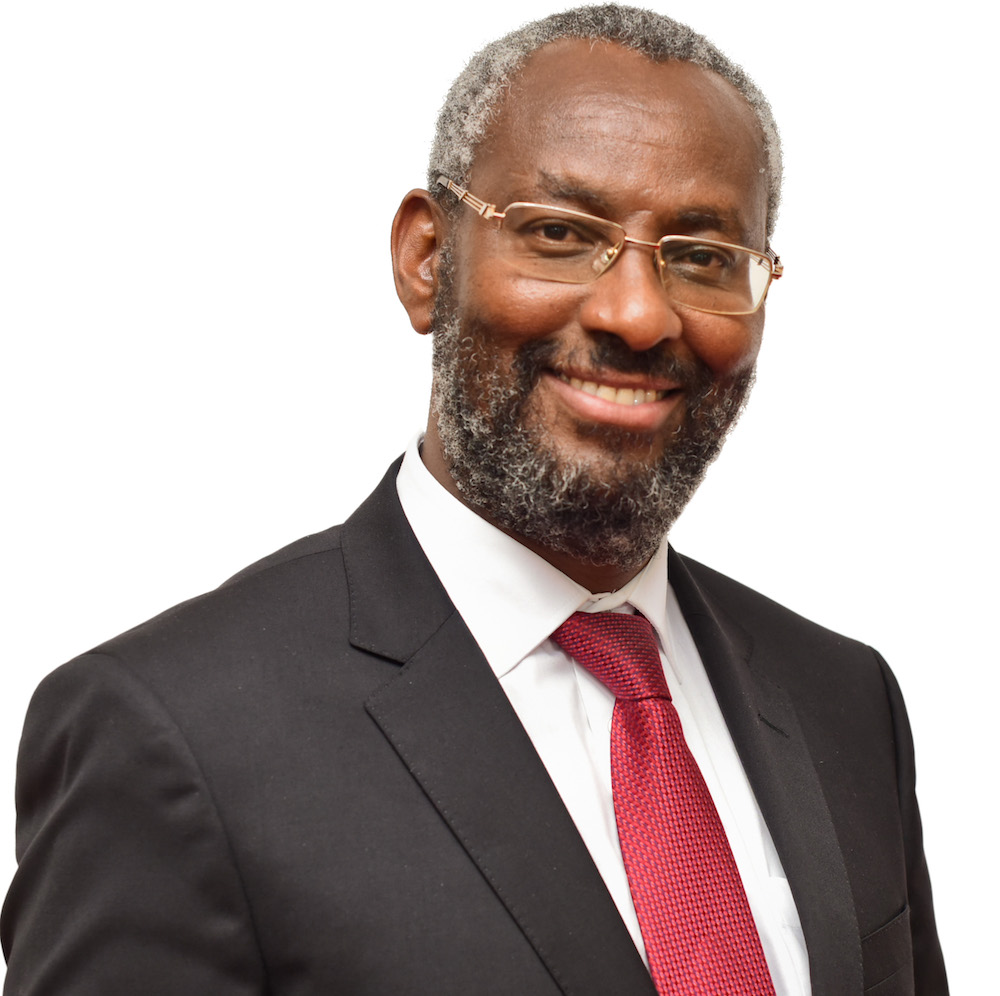 Professor Stephen Kiama Gitahi holds a doctorate degree in Structural Biology from the University of Bern, Switzerland under the mentorship of Professor Peter Gehr . His PhD marked a culmination of a long journey of sustained personal illumination driven by an abiding curiosity to broaden the horizons of knowledge.

As Professor Kiama pursued his scholarly and teaching roles, leadership duties seemed to beckon at every turn. It is in delivering these tasks that he garnered broad hands-on skills, practical knowledge and fundamental proficiencies in key structural, legislative and regulatory frameworks crucial to the effective management of institutions of higher learning. In the fullness of time, he has accumulated a vast wealth of administrative experience, honed his skills in management of people and programmes for set outputs, cut his teeth in leadership and distinguished himself as a capable leader. His progressive rise in leadership roles where he has served in senior management positions at the University of Nairobi over the past 17 years speak to this fact.

He has served as a member of the University of Nairobi Senate since 2003 thereby gaining vast experience in directing and supervising academic programmes.

In addition, he has exhibited remarkable gift in people management, eye for detail and possesses exemplary skills in financial management, networking, fundraising and resource mobilization. It is for this reason that Professor Kiama was appointed a juror for Wangari Maathai Institute Campus and University of Nairobi Tower design competitions respectively, Golden Climate Awards organized by Light Academy and the Wangari Maathai Scholarship Award.

Upon graduation, Prof. Kiama joined the faculty of University of Nairobi as an Assistant Lecturer in the Department of Veterinary Anatomy. Since then, he has risen through the ranks to positions of Lecturer (1995), Senior Lecturer (2002), Associate Professor (2012) and Full Professor (2016). Instructively, Professor Kiama has steadfastly scaled the ladder of scholarship from the very bottom to the pinnacle of academia as a Full Professor.

Professor Kiama earned his Doctor of Philosophy degree in Structural Biology from University of Bern, Switzerland, in 2001 under the tutelage of Professor Emeritus Peter Gehr. His PhD thesis that was titled “Functional and Morphological Characterisation of Particle – Dendritic Cell Interaction” was scored “Very Good”. Previously, he had pursued his Master in Veterinary Anatomy under the supervision of Professor J.N. Maina, a renowned avian morphologist, and Professor Josabatta Battacharjee. His masters thesis was titled “Morphology and Morphometry of the Pecten Oculi: A Comparative Study”

By his own admission, Professor Kiama was fascinated by animal anatomy from a tender age. In his adolescence, the death and burial of a farm animal from unknown causes was fodder for his curiosity and experiment. If bones could talk, they would tell the story of a young Kiama who upon decomposition of the carcass, would dig them up and rebuild their skeleton. Kiama would never have known that this seemingly innocent preoccupation with animal life was preparing ground for a career in Biology and thereafter Veterinary Anatomy.

Years later, Professor Kiama’s elder sister Susan would serve as an Animal Health Assistant. This further fueled the fire of his career interest. His greatest inspiration to venture into the veterinary field, however, was one Dr. Ciira, a Veterinarian from his home area who struck youthful Kiama as oozing in youthful exuberance and sophistication. Unlike in human medicine where patients went to the doctor, Dr. Ciira would be the one visiting homestead after another attending to animals in ill health. Impressionable Kiama would be persuaded that this was the ideal way to work – rendering professional services in situ. That could explain why Professor Kiama was so swift in asking students and staff of the University of Nairobi to operate from home and continue with their duties soon as COVID-19 was declared a global pandemic.

Professor Kiama is an astute pedagogue with a natural penchant for excellence. Professor Kiama has a solid and discernible commitment to the mentorship of undergraduate and post-graduate students as well as members of faculty he has worked with. As a result of this, he has a commendable list of academic protégées. To date, he has successfully supervised and mentored 12 PhD and 14 Masters students to completion.  He is an accomplished scholar with a solid and proven track record in formulating and managing academic programmes. His distinguished input in academic discourse, research and publication speaks for itself. He has taught and examined students at University of Nairobi and other Universities since 1990. In 2010 he was invited by the founder Dean of the Faculty of Veterinary Medicine, Prof. George Kwame Aning to Ghana to give introductory Anatomy Lectures to students who registered for the inaugural class of the Doctor of Veterinary Medicine, University of Ghana, Legon, Accra.

Professor Kiama has had an enviable track record in academia, research and publication. This is demonstrated in his contribution to several publications that he has authored or co-authored in peer reviewed journals. To date, Professor Kiama has co-authored over 150 journal and conference publications. The papers have been published in prestigious and high-impact factor journals such as Nature, Nature Communications, Journal of Leukocyte Biology, Immunology and Cell Biology, American Journal of Pathology, American Journal of Respiratory, Cell and Molecular Biology and Journal of Ethnopharmacology. His scholarly contributions are widely cited by peers.

Regionally, Professor Kiama served as the Node Coordinator of the African Natural Product Training Network (RISE-AFNNET) involving three universities from East Africa (Makerere University (Uganda), Sokoine University (Tanzania) and University of Nairobi (Kenya), a network formed upon competitive funding award from the Carnegie Corporation of New York through SIG-RISE. Through this programme, he provided scholarships to several postgraduate students, thus contributing to the next generation of academia. Most of the beneficiaries and graduates of this scholarship have been absorbed in academia including the University of Nairobi.

Leadership in the Higher Education Sector

Professor Kiama possesses a unique aptitude that enables him to maintain a vibrant research career as well as return excellent record of visionary leadership whose manifest success is in various leadership positions he has held at the University. His proficiency at attracting and maintaining networks within and between local and international universities keen on cross-fertilization of ideas and experiences across institutions has been as impactful as it has been momentous.

The above qualities, far beyond the realms of the University of Nairobi and within the Higher education sector, carry considerable weight.

In 2019, Professor Kiama was elected the Chairman of Deans and Principals of the Regional Universities Forum for Capacity Building in Agriculture (RUFORUM). RUFORUM is a consortium of 114 Universities in 38 countries in Africa whose mission is strengthening the capacities of universities to foster innovations responsive to the needs of smallholder farmers.

Professor Kiama played a key role in conceptualizing and actualizing the Wangari Maathai Institute for Peace and Environmental Studies during his tenure as the founding Director, Associate Dean of the Faculty of Veterinary Medicine and Chairman of the Department of Veterinary Anatomy and Physiology.

From August 2008, the late Professor Wangari Maathai, 2004 Nobel Peace Laureate, and in whose honour the institute is named, spent many hours with Professor Kiama sharing her vision of the Institute. Unfortunately, she passed on in 2011, barely two years after the University of Nairobi Council approved the establishment of the Institute. By then, thankfully, Professor Kiama was well equipped to carry her vision to fruition, a role which he performed with remarkable enthusiasm.

In breathing life to this vision, Professor Kiama provided compelling leadership in the development of the Institute’s first strategic plan. Further, he led in the formulation of the Institute’s syllabi in Master of Science in Environmental Governance, Doctor of Philosophy in Environmental Governance and Management. As the first director of the Institute, Professor Kiama provided leadership in forging of links and collaborations. He guided the Institute’s physical design, spending countless hours with the architects and engineers in efforts to reduce the design concepts on paper before the development of the scheme drawings.

In the larger scheme of things, as the progressive head of the Department, Institute and College, he was responsible for overseeing all the attendant academic programmes.

Delivery of the Institute benefitted from Professor Kiama’s dedication and fortitude and drew from organization and planning expertise as well as astute networking with stakeholders drawn from the academia, government institutions and nongovernmental organizations. Indeed, the inaugural strategic plan continues to guide the Institute in its desired and projected growth path to date.

Despite his heavy involvement in university teaching and administration, Professor Kiama has always found time to be actively engaged in various leadership roles in society.

Professor Kiama served the Chiromo Club community as its Secretary (2009 to 2011) and later as its Vice Chairman (2013 to 2015). Chiromo Club is a community majorly composed of peers in academia and alumni of the University of Nairobi. It was during Kiama’s tenure that major renovations at the Club were undertaken and Friday evening patrons treated to the harmonious melodies of live bands. Professor Kiama would later serve as the Chairman of Upper Kabete Staff Club.

In his younger days and following his maiden graduation from University of Nairobi, Professor Kiama was nominated and indeed served as the Chairman of the PCEA St. Andrews Church youth group. Thereafter he served as the Secretary of the PCEA Ngong Hills Presbyterial, and Chairman of the PCEA Milimani Presbyterial youth group church. He fondly remembers his first car, a cream Mazda registration number KMU 550, that he used to shuttle to and between church meetings.

These early leadership roles in church continue to define the faith beacons and values within which Professor Kiama operates.

Professor Kiama is not new to the rigours that ultimately build strong character. He does not believe in quitting. His experience during the pre-university training programme at the National Youth Service (NYS) back in 1986, for example, tested his mettle and ability to endure daunting physical, mental, and emotional circumstances. Alongside his contemporaries in Mbuni Company - who included the likes of Stephen Ikua, the Administrative Secretary in the Ministry of Labour and Social Protection - the NYS experience remains a life-long reference point whenever the assaults of life happen.

In order to sharpen his strategic and transformative leadership skills, Professor Kiama registered and successfully completed a course in Strategic Leadership and Development Programme at the Kenya School of Government in August 2014. This course imparted in his skills on strategic thinking in leadership; developing leadership competencies; leadership performance improvement and culture and change management.

Professor Kiama has through time demonstrated the uncanny capability to redraw his sigmoid every time it reaches its peak. This is evident in his relatively steep trajectory to top echelons of university leadership. As man and indeed the institution one superintends over is transformed by the principle of transcendence, only time will tell what sigmoid the quiet and thoughtful Professor will conjure from here.